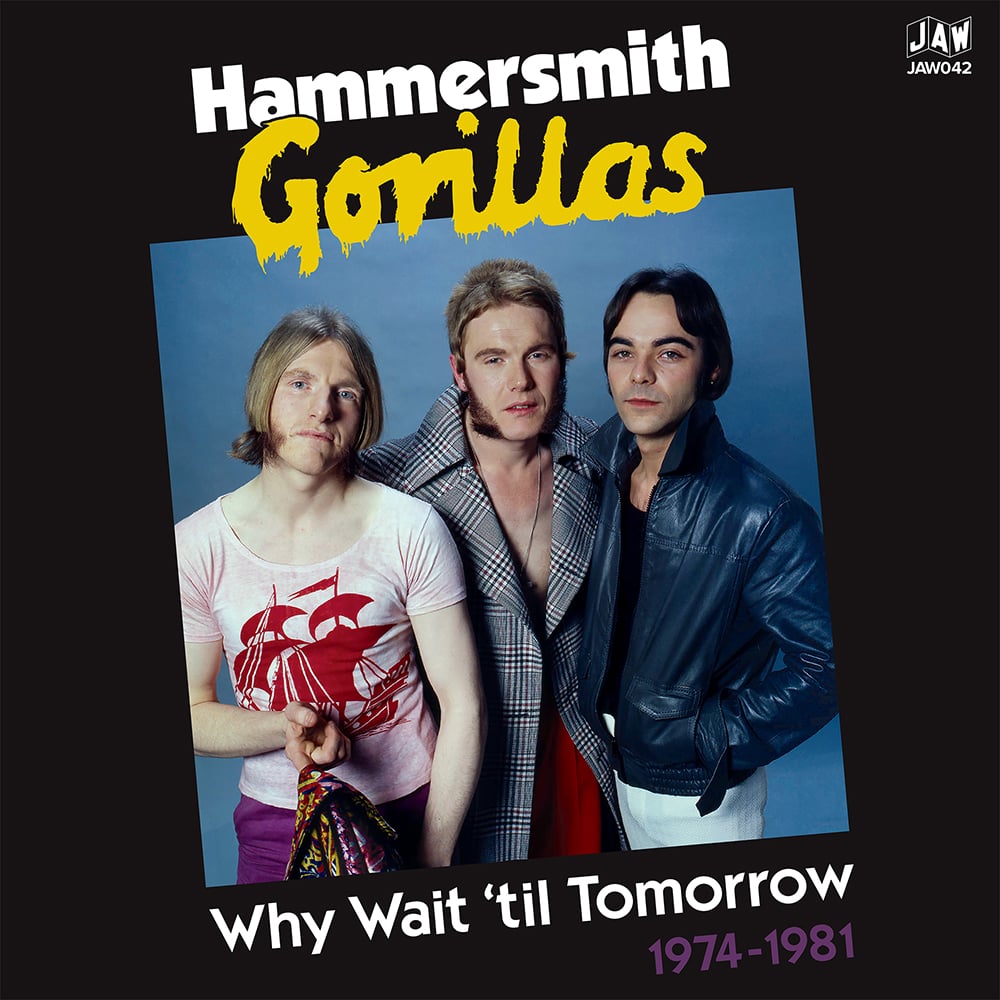 GO, GO, GORILLAS! Literally everything HAMMERSMITH GORILLAS ever recorded that is not on their classic "Message To The World" LP. 26 tracks total - clocking in at a whopping 84 minutes! Includes all 6 of their singles, 7 outtakes never before available on vinyl, 1 aborted single, plus 6 unreleased live songs recorded in early ‘77, 3 of which were never recorded in a studio. All but two of the tracks are from the master tapes. Those two masters are missing. If that wasn’t enough, there are also new liner notes/new interviews with Jesse Hector and Gary Anderson by Phil King, plus unpublished photos!

THE HAMMERSMITH GORILLAS are one of the great UK "should-have-been" groups of the 1970s. Chalk it up to being ahead of their time, bad luck, and/or bad management. Both singer/guitarist JESSE HECTOR and bassist ALAN BUTLER had already been in what was arguably Britain's first punk group CRUSHED BUTLER, formed in 1969. Drummer, GARY ANDERSON, was the last piece of the puzzle, but the world wasn't ready for the lads then, and still wasn't ready for them nearly ten years later as Punk exploded across the country and up the charts. Bizarre management tactics such as not having the group do any live gigs the first two years of their existence didn't help matters. The music speaks for itself on this massive two album set and HAMMERSMITH GORILLAS are more than worthy of such treatment. So great was this group, that even when forced to record a cover of a mediocre-at-best Stones' tune, "Luxury", they managed to make it their own and turn it into a minor moody masterpiece. The real heart of the matter is JESSE HECTOR's originals. HECTOR is too unique to be tied down to any one genre and his incredible controlled vibrato is the best since BOLAN. Since the punters like to be told what other artists a certain group sounds like, the closest we can come up with is a strange amalgam of SMALL FACES/SLADE/T. REX, but they are also their own completely unique thing. Jesse may have never been able to write a tune like "Telegram Sam", but BOLAN didn't have a song like "Gatecrasher" in him either.